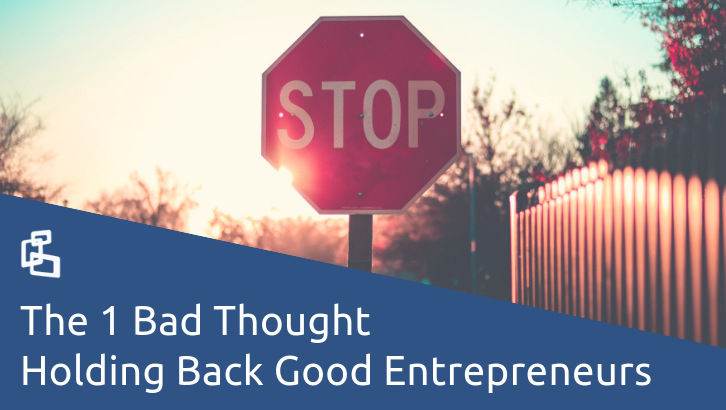 Today I would like to help you get over a particular thought that has (probably secretly) been holding you back from booming successes.

But in reality, this thought is a wolf in sheep’s clothing, and it’s been secretly keeping you from making bigger and better moves in your business and career.

So, let’s dive into what exactly this thought is, how you came to think it, and, lastly, an alternate perspective that will open the floodgates for opportunities…and even have more fun in your work.

Yep, that’s the power in a simple shift of thought. So, here we go…

*A quick observation before we begin: It seems as though emotionally stable people struggle with this more than narcissistic people with over-inflated egos. Which means, hey! if you’re feeling the struggle, then you’re a nice person and we’d likely get along! So, that’s a win. Congrats on not being an a-hole.

Alright. No more suspense.  Here’s the seemingly-perfectly-reasonable thought that has actually been preventing you from the kind of exposure and recognition that will level-up your business and career.

The thought is, “I just don’t want to be like [insert name here].”

Comparison Avoidance is a very different creature than comparing yourself to someone else’s successes. Usually, when you think about the dangers of comparison, it’s because you are being unfair or unkind to yourself by comparing the first few chapters of your story to someone else’s final chapters. This can lead you to believe that you’re just not good enough.

But Comparison Avoidance starts with you thinking that you’re “too good.” Meaning, you don’t want to stoop to someone else’s level.

You have high standards and you don’t want people to associate yourself with someone else’s lower standards.

You kind of hate what you see out there in the email marketing world. Bait-and-switch offers tick you off. You can’t stand clickbait-y subject lines. And Zeus help you if you see a bogus email come in with Re: or Fwd: in the subject when nothing has been Re’d OR Fwd’d. (Makes. My. Blood. BOIL.)

I get it. A lot of people are using sales and marketing tactics that are morally ambiguous, to say the least, or downright criminal, at worst. I applaud you for not wanting to be associated with those types of people.

Don’t let poorly used techniques blind you to the effective uses of those techniques.

When you see an ugly house, you don’t think, “Wow. I don’t want to be associated with the contractor that built that house. So, I’m going to avoid having a house altogether.” Of course not! You want a house; you just don’t want THAT house or a house that’s built THAT way.

And yet, this exclusionary point of view is what most people adapt, especially when it comes to using influential communication techniques.

Things I hear all the time:

And so, out of fear of being associated with such people, business owners “procrastinate” or just downright avoid using POWERFUL tools and techniques altogether!

That don’t make no sense.

The Consequences of Comparison Avoidance

Chances are right now you are thinking of at least one online marketer who has achieved impressive successes, but you hate how they sell their services. Their videos are sleazy; their emails are scammy; their webinars are painfully slim in content. It’s even worse when this person is a competitor of yours and they’re (seemingly) more successful than you.

This is why you’re struggling. Your comparison avoidance is holding you back from taking action.

Right now, I’d bet that you can think of a marketing campaign or sales strategy that you should implement, but haven’t. You’ve probably been sitting on this project —and others—for weeks, months, years.

So, what do you do? Do you have to turn into the slimy kind of marketer? Do you really have to sell the way they sell?

The Right Way to Use the Tools

To get past this chronically painful thought, it helps to look at the principle behind a technique, while not being distracted by how poorly it’s been used.

Let’s take a look at those emails with the fake “Re:” in the subject line. You don’t like those emails is that they’re essentially a lie. They make you think that this email is a part of an important thread, but when you open it, BAM! Annoying sales copy.

But what is the principle behind this technique?

The “Re:” emails took off is because, at the core, it was a way to make people think the email was from someone they know because they’re “clearly” in an email thread with someone they might have forgotten about. Therefore, the “Re:” created the illusion of an email coming from a trusted source.

THESE are the questions that will help you find your influential message.

By asking yourself what works about a poorly executed, yet clearly effective, technique, you will discover the core principle behind it. With that knowledge, you can utilize the technique to work EVEN MORE effectively for you.

You can’t blame the tool for its owner.

The same can be said for marketing, sales, influential strategies, and —truth be told—communication as a whole.

The tool is not good or bad. It’s not right or wrong. The tool is the tool.

How you use the tool determines what magic you’re ultimately creating.

So think back to that list of things you know you should do. Rather than coming from a place of fear and thinking, “I don’t want to come across like such-and-such or so-and-so.”

Instead, ask yourself, how can I make this my own?

How can I make this something that still aligns with me and my brand?

The REAL Reason You Need to Stop Comparison Avoidance

Your voice is needed.

You know who’s not worrying about being compared to other people? That person/company/brand that is going all out and using influence tactics poorly.

Meanwhile, you’re stuck worrying and procrastinating. So, that means that good-natured people like you are holding back while blowhards are screaming into the marketing megaphone.

And what does this mean for the marketplace? They are stuck listening to the blowhards.

Stop NOT adding your voice to the conversation.

We need more positive-intentioned people to speak up, put themselves out there, and show that you can use influential techniques in positive and effective ways.

I know that might sound harsh, but I’m speaking from experience here. I’ve been in your situation; I’ve had your mindset.

In my world of influential communication experts, the market is filled with sleazy skeezoids teaching influence techniques. Even though my passion has always been around persuasive communication skills, for YEARS I held off on implementing sales and marketing strategies because I didn’t want to be associated with those creeps.

And shame on me for holding back for so long.

Because I wasn’t fully adding my voice to the conversation, so many people who wanted to be more influential were stuck either learning from those questionable sources or simply decided not to pursue learning these powerful skills at all.

I’m wondering, can you relate?

There is No Comparison

Now is the time to remove your comparison avoidance person from the equation. It’s not about them. You play your game, your way.

Craft the message that feels authentic and aligned for you.

You don’t need to “play dirty” or stoop to someone’s level to be seen or heard.

It’s not a matter of IF you should use influence techniques. (You absolutely should!) It’s just a matter of how you want to use them. You can communicate a single concept a million different ways.

Find YOUR way, because then there will be no comparison.

Influence & Kindness: Why It Matters to Not Suck as Human Being