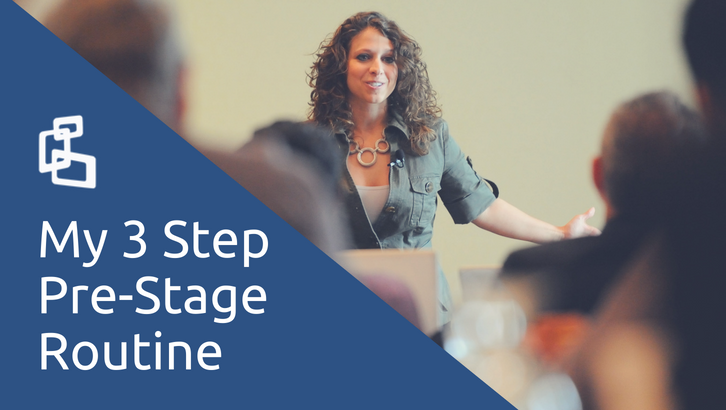 I’ve been a professional speaker since I was 23.

Before then, I was a stage actress from 14 years old all the way through college. When people learn what I do for a living and find out how long I’ve had my “stage time,” they usually draw the conclusion, “Oh, so you probably don’t get nervous when you have to speak because you’ve been doing it so long.”

I still feel nervous. And not just before I step on stage. I feel nervous before a webinar, before a coaching call, and before sales calls as well. So, basically, I’m nervous 50% of the time when I’m on the job.

As the saying goes, “You can’t get rid of the butterflies in your stomach; just get them to fly in formation.”

Fear is a constant. It never goes away. But, you can harness it.

One of the best lessons I learned about fear came from the book Big Magic by Elizabeth Gilbert. She says that fear will always be on your journey. You should welcome fear and let it be a backseat passenger, but it should never be allowed to drive the car.

Over the years, I’ve developed a simple pre-stage routine to manage my fears right when I need to be amazing.

Most people mistakenly believe they can think their way out of nervousness and fear. Emotions are like waves in the ocean. Fighting against them is futile, and rolling with them can be fun! Thoughts are a useless weapon in this circumstance. A pep talk won’t do it. Being cerebral during an emotional wave is like bringing a knife to a gunfight. The emotions will win.

So, what can you do?

First, realize that what you’re feeling is a result of a chemical reaction that is being interpreted by your body. When you get triggered into freeze, flight, or fight mode, your brain wants to protect you by pushing out hormones and chemicals, like adrenaline and cortisol. This chemical dump creates a chain reaction in your body – most notably, tension and shallow breathing, both of which are terrible for speaking!

You can short-circuit the nervousness by consciously releasing the tension building up in your body. Now, I don’t mean that you just say, “Relax, relax, relax” in your head. That’s still cerebral.

Imagine a Xerox scanner going over your body, starting at your toes. Don’t let the scanner move up to the next part of your body until you have relaxed the area the scanner is currently shining on. So, if the scanner is on your calves, you won’t move it up to your quads until those calves have released and relaxed.

By going through this process, the tables are turned and your body is now sending a message to your brain. The brain senses the change in your body and says, “Oh, the body seems ok now. I guess the threat has passed. I’ll stop producing the emergency concoction. Cool beans!”

This is how you can control your state — the culmination of your mindset, emotions, and physicality.

Once I’ve taken control of my body and consciously relaxed away the building tension, it’s time to focus on step 2.

Breathe. Your Life Depends on It.

When nervousness and fear are triggered, two things happen: your body tenses up and your breathing becomes more shallow. We’ve tackled the first challenge, now on to the next.

Most people don’t know how to breathe properly. Seriously. Breathing is an involuntary behavior that we’ve been doing literally since the moment we came into this world. So, it makes sense that over the past few DECADES you’ve likely built a few bad habits if you haven’t been taking time to regularly check in with your breathing.

Most of us breathe shallowly already. After years of slowly accumulated tension in our bodies from chronic, acute levels of stress, we’ve restricted our breathing.  So, when most people take a few deep breaths, they get light headed!

In fact, in one acting class, my professor walked us through relaxation and breathing exercises as us students stood in a circle facing each other. We were simply breathing. In. And out. Retraining our bodies to breathe fully.

I looked to my left and one of my classmates passed out face first into the floor. She quickly came to and my professor handled the situation with grace and expertise, but we were all pretty stunned.

Keep in mind, this was a perfectly healthy college female who just took an involuntary nosedive. She wasn’t overweight and didn’t have any health issues. In fact, she didn’t even drink alcohol. (And this was college!) So, what the heck happened?!

This poor girl had apparently been carrying so much hidden tension in her body, that once she released it and properly breathed, her body freaked out because it was getting oxygenated for the first time!

I witnessed first-hand how tension and poor breathing can stay hidden, but with dire consequences.

So when you’re on stage, it’s no wonder that you might feel out of breath or feel like you’re practically gasping for air. Because you are! The emergency chemical cocktail your brain is shooting out is only adding to the problem.

As they say, nervousness is excitement without the breath.

That’s why before I go onstage I practice deep, slow, relaxing breathing until I feel like I can take those deeper breaths without thinking about it or forcing it to happen. Without fail, this one step gets those butterflies to start flapping their wings at a more pleasant pace.

You’ll find that as you do this, steps one and two (Xerox scanner relaxation and deep breathing) tend to happen simultaneously. But, before I move on to step three, I still take a few moments to only focus on step two — just to make sure I’m fully fueling my body with easy, full breaths.

Bonus tip: Breath is the fuel for your voice.

Many people find that their voice cracks or gets gravely when they’re on stage, especially if they are up there for a while. Some even lose their voice. I actually had this problem! If you’re not breathing well enough, then your vocal chords don’t have enough fuel to create the dulcet tones that is your proper voice. As a result, the chords get strained, dry, and – if you’ve had this problem long enough – you might even create tears or nodes on your vocal chords. No bueno!

Proper breathing will help you have a full, well-rounded voice that sounds confident and not a strained, stressed, and scratch sound.

You really only have one job when you’re giving a presentation. And that is to connect. Your ONE job on stage, on a sales call, or while leading a meeting is to connect with your audience. That’s it.

When you connect with your audience, magic happens.

Before you step on stage, you shouldn’t be spinning your wheels over the content you’re about to deliver. (You know your content. Stop pretending like you don’t!)

In acting, “you rehearse so that you can forget the work.” Meaning, by the time the curtain goes up, all those hours upon hours of rehearsal should be ingrained within you. You can’t be the character if you’re still in your head. You have to (literally) breathe life into it.

By the time you’re about to step on stage or pick up the phone, there is no more work left to be done. Now is the time to just be in the moment. Be with the people you’re talking to. Embody your message. Simply connect.

When you connect with your audience, it’s amazing how forgiving they become.

Connection becomes a buffer for your mistakes.

It’s amazing how the stress melts away from my body when I know that I only have one job to do: connect. It gives my mind and body the permission it needs to let go, trust, and rock it out.

It’s with that spark of excitement that I step out on stage.

Next time you’re headed on stage, try these 3 steps to transform your pre-stage jitters into owning you platform with excitement! Let me know how it goes.

Life Lessons from Our Furry Friends