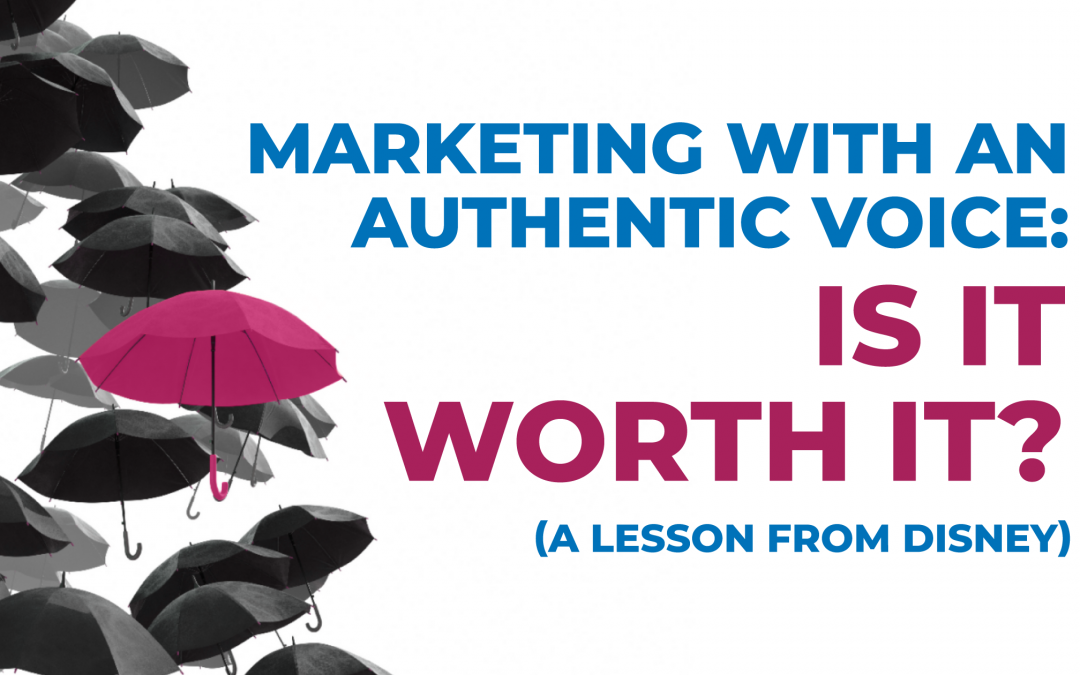 Finding and using an authentic voice in thought leadership is more difficult than marketing gurus let on. From small businesses to big corporations, everyone wants to represent and promote their brand in authentic ways.

But TRUSTING your authentic voice takes more bravery than most people (and brands) are willing to risk.

Over the past few years, Disney has produced a number of live-action recreations of their nostalgic masterpieces from The Disney Renaissance era.

The Disney Renaissance era refers to 1989-1999 when Howard Ashman and Alan Menken created Disney classics like The Little Mermaid, The Lion King, and Beauty and the Beast. It’s low hanging fruit for Disney to capitalize on the nostalgia of parents who want to share Disney moments with their kids.

But Disney has struggled in finding an authentic voice for quite a few of the remakes. Aladdin being a perfect example.

The role of “Genie” was tailored for Robin Williams. His ad libbed humor created a one-of-a-kind character. In the live action remake, Will Smith and the production team took on the challenge of recreating the unique and iconic role. And the struggle is obvious in “Friend Like Me“, the song that introduces “Genie”.

“Friend Like Me” is Robin Williams. But the movie team still went with a shot-for-shot remake of the number. And it falls short. (How could it not?) They were willing to veer away from the original when they added a new song for “Jasmine” and a dance number for a new party scene, but not when it came to Will Smith’s opening song. the remake included an additional song for “Jasmine” and a new dance number at a party. But they didn’t for Will Smith’s opening song. Why?

After all, the soundtrack for the film’s end credits is “Friend Like Me”, but it’s a Will Smith version – adding a hip hop beat and using Smith’s talents that made him a Grammy-winning artist. So, it begs the question, “Why was Smith’s version not used in the film?!”

Instead, they said, “Who doesn’t love the classics?! Am I right?!”

So, they created Will’s best attempt at Robin’s song.

Breaking the Habit of Marketing Mimicry

If Disney uses copying as a safe bet, then why wouldn’t you?! Why wouldn’t you look at examples of marketing in your industry and use those as a template? It’s probably the safer bet, right?

Ouch. Lots of ouches. Most people aren’t willing to *risk* those kinds of ouches.

Mimicking another’s voice (or marketing approach) subconsciously shields yourself from the fear of personal failure. And that’s ok. In fact, it’s normal to try out other brand styles.

(Just be warned. Sticking with another’s voice for too long makes it very easy for imposter syndrome to creep in and make it even more difficult to create content.)

“Proven” paths to success often overlook context. And context is critical. Another person’s success is the result of their talents, their life stages, resources at their disposal, their support systems, their available time, their motivations, ….the list goes on and on!

The goal is to find inspiration, and then make it your own.

If you want to create content that positions you as thought leader, an existential crisis (or two) are bound to show up. Why? Because, you discover your authentic voice by answering some pretty deep questions:

And if you’ve soul-searched your way to those answers and create like you  and teaching like you (and no one else), then you deserve a freakin’ parade! One in the likeness of Prince Ali’s.

[This article was inspired by this video from Sideways. His channel has been well worth the embarrassing amount of time I’ve spent watching his videos.]

P.S. Here are a few other ways I can help you increase your influence, whenever you’re ready.

1. I’m putting out a lot of great tips on LinkedIn and Instagram. Follow me for influential insights that help in business and life!

2. Grab a FREE copy of my Mindreader Blueprint. It’s the step by step guide for finding your influential message. Use this workbook to make your next pitch or presentation more persuasive!

3. Booking speakers for virtual events or post-COVID live events? Your audience will LOVE learning about how to be more persuasive! By understanding the influential process (Observe, Connect, Influence), your group will be more equipped to inspire minds and inspire action. You can find out more about my speeches and programs, here.