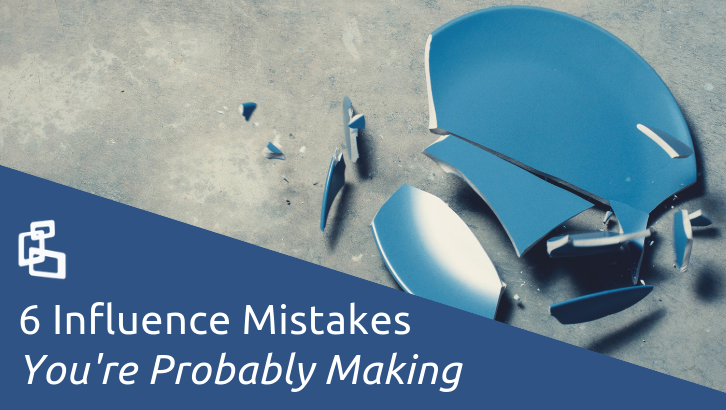 Today, I am going to walk you through the six most common, deadly, horrible, terrible, horrific influence mistakes you can possibly make.

Of course, it’s not nearly that dramatic, but anything that gets in between you and accomplishing your goal has got to go!

When you need to be influential, please, oh, please try your darndest to not start with the question, “What should I say?”

When you want the magic of influence to coalesce in front of you and help you be convincing, I promise it will not happen when you’re thinking “What should I say?” That question leads you to go inside yourself to find the influential answer. Meaning, you’ll likely come up with something that would convince YOU.

When you do this, you are cutting out the most important part of the influence equation: the person you want to influence! (Whom we’re going to refer to as your influence partner)

Your influence partner contains all the keys to unlocking how you should influence them.

THEY are the ones who decide if you’re influential or not. So, why wouldn’t you begin with them in mind?!

The question that you should ask is: What do I need to know?

What do I need to know and observe about this person? Where are the missing pieces? What are the knowledge gaps that I have between me, them, and where I want to get them?

When you learn that there’s a whole world of influence techniques discovered by experts and psychology studies, it’s normal to want to apply those influential techniques ASAP! Because who wouldn’t want to easily string together five magic words and get the sale?

(Side note: Believing that there are “perfect” scripts that lead to compliance or sales is like believing in the brown note…It’s not a real thing, sweetheart.)

The problem with using influence techniques right after you read about them is that without observing your influence partner or locking down your connection with them, your technique attempt becomes painfully obvious, and teeters on feeling manipulative.

A bare influential technique is always ineffective. Techniques need to be AN ingredient of your influential mix. Influence techniques should always be accompanied by your observations, connection, and context.

If you haven’t built rapport with your influence partner, you have not earned the right to influence them.

That personal connection that you have with someone is 80% of the work before you start using influential techniques.

Rapport is the “Well, why didn’t you say so in the first place?!” that allows you to enter the Emerald City of Oz where they say, Okay, I’m open to your influence.

Without rapport, your techniques will definitely fall flat, and people will start to get that slimy, gross feeling around you. This is the pinnacle of poorly executed influence.

So, instead, focus on connection over technique.

The third biggest influential mistake is lacking a clear goal.

This one’s a little tricky because you might think you have a clear goal, but might not. Most people are very clear on what they don’t want to experience. But that’s not actually a goal.

You may know what you don’t want, but that does not mean that you have clarity on what you DO want.

A negative-based goal does not equal a goal at all.

I see this all the time at my speeches during the Q&A section. Without fail, someone (and often a number of people) will want to get my insight into how they can get so-and-so to stop doing such-and-such.

To help them find their answer, I ask, “What would you like to experience instead?” And without fail, they reply, “Well, I just really get frustrated when they do such-and-such. I wish that they wouldn’t do that.”

I respond, “That is still what you DON’T want from them. What DO you want from them?” Their wheels turn until they realize that they have no definition for what they DO want. It’s a very powerful learning moment for two reasons. One, they now see their role in the difficult conversations they’ve had with so-and-so. And two, they now know that in order to better guide so-and-so to their desired behavior or outcome, they need to have a defined influential goal in mind.

Influence is communication with a goal. If you don’t have a target, you’ll never be able to hit it.

How do you create your influential goal?

That last step is key.

You always want to set milestones for your influential success with observable behavior.

You can’t know what someone is feeling, but there are typically actions associated with a shift in feelings. What would those actions be? That is what you want to influence someone towards. This is how you create tangible results from your intangible communication. You can’t just instruct someone to experience a mood. You have to know how that mood will be demonstrated in the real world.

Once you hone in on those three answers, THEN you have your true influence goal. You have the target you know you can hit on the bullseye.

Don’t worry, I haven’t turned into a relationship expert! (Although, I think I would be pretty darn good at it.) 😉

When it comes to influencing, please avoid marriage before dating.

Most people fail in their influential goals because their one big ask should have been many smaller asks.

Your influence partner must overcome many psychological barriers to say yes to something big. You could try to run that gauntlet, but sometimes it’s better and easier to get them to say yes to a series of smaller requests.

This is known as two different types of techniques: the widely known “foot in the door” technique and the “series of yeses” technique. Both of which centralize on the idea that when your influence partner says yes to one little incremental step, then they’re more likely to yes to the next, and the next.

So, don’t shoot for the marriage just yet, get them to date your idea, first.

The false belief that what convinces you will also convince your influence partner is a big mistake.

Let’s say you are convinced by arguments that have to do with improving people and relationships, creating harmony, and making sure that everyone is happy, heard, and considered. You might then make a presentation that highlights all of those people-focused bullet points.

However, Betty in Accounting is a different influence personality type and doesn’t care about feelings. She wants to know the numbers, the bottom line; she wants charts and statistics. Needless to say, she isn’t convinced by your argument because you didn’t include what she needed to hear in order to be influenced.

So, if we circle back and incorporate the first solution we talked about – “What do I need to know?”– then you will avoid using techniques that would just convince you.

By the way, if you want to know what Influence Personality Type you are…just click here to my website and take the quiz 🙂

Do you ever get stuck in saying your pitch or argument the same way over and over again? To the point where you honestly don’t feel like you could find another way to say it?

Chances are you haven’t actually explored every single option of how to say it. If you feel like you’re beating your head against the wall when trying to communicate your message, it’s probably because you’ve gotten locked into how you say it.

Influence means breaking out of your communication patterns.

This means building flexibility in your communication.

Here’s an example from last week’s blog on being more convincing. If I’m selling health and wellness, I could sell the vanity aspect to young folks. (How to look good naked, or how you will put on all your fancy clothes and feel amazing in them, be the envy of all of your friends.) Vanity is a great way to sell that particular service.

However, I could also sell that exact same offer to senior citizens by selling healthy living without pain, improving your balance, being able to live a long life and still being able to enjoy your grandkids.

It’s the exact same package or service that I’m selling. I’m not changing workout routines or nutrition advice hardly at all, but now I have two very different ways that I can say talk about the exact same thing.

Moral of the Story

How to be More Convincing Through Context