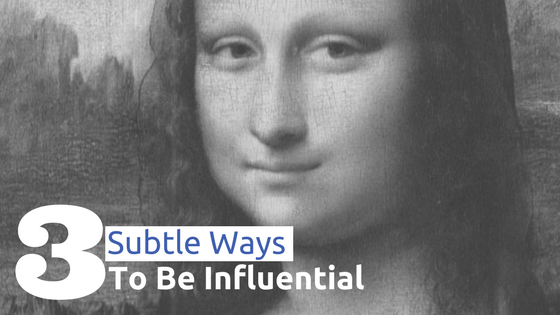 Influence isn’t flashy. The persuasive arts are a subtle art form. Just like acting, if you can see it happening, it’s not very good.

The good news is that some of the most persuasive acts don’t require much work. Sometimes simple is influential.

Here the 3 subtle ways to improve your personal influence every day:

Be What You Want to See

This is a life lesson all on its own, but allow me to delve specifically into its influential aspects.

Actions speak louder than words. “Do as I say, not as I do” doesn’t fly in the world of persuasion. So, if you’re hoping that a few persuasive phrases will work miracles, think again. People will notice the disconnect and be turned off by it.

I see even good-hearted people make this mistake more often than they realize.

The best example is in meetings and conferences. A manager will talk about how they would like to see more excitement from the group about a new initiative, all while using a judgmental tone mixed with disappointment. Who’s going to get excited about that?!

There’s also a scientific reason why “be what you want to see” is so influential. A relatively new discovery in neuroscience are mirror neurons. While there’s still more to learn, this area of the brain seems to be a significant part of our learning and empathy. Specifically, we tend to feel what we see.

Think about your favorite America’s Funniest Home Videos clip where some poor schlub gets knocked in the balls. You flinch (even if you don’t have a pair yourself). For a split second, your brain feels the pain it witnessed.

Or how about when your favorite sports team (cuz, SPORTS!) scores at a crucial moment? Your heart pounds with excitement and you leap up from your seat to cheer. You feel the win while watching it.

Those experiences are thanks to mirror neurons. 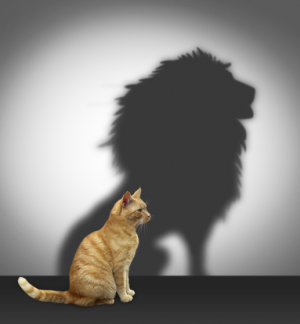 Your energy must always match your words. If not, people will notice the mismatch, put up their BS defense shield and second guess your trustworthiness. All of which make influence damn near impossible.

A big part of influence isn’t what you say, it’s how you say it.

A Flash of Recognition

In a split second, someone can feel connected to you. You just need to know how to trigger it.

I first came across this lesson from an Oprah Winfrey episode back in the day. In an episode on parenting, she said something to the effect of, “Your children want to know, Does your face light up when they walk into the room. They notice.”

Of course, this can be said for any relationship. When your significant other comes home from work, do you light up?

How about when you see your coworkers first thing in the morning? Light up? Or darken?

That split second of energy is a key indicator of how you feel towards that person (which they pick up on and react to) AND also dictates further interaction – if it’s going to be positive or not.

Luckily, there is a super simple, quick technique for improve these interactions, thus improving relationships,… thus improving your persuasive power. 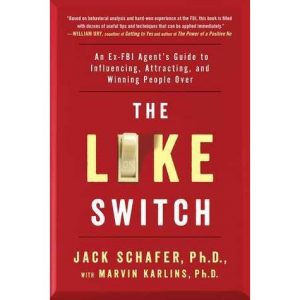 The technique comes from The Like Switch by Jack Schafer. Dr. Schafer is a former FBI Special Agent who shares his secrets for connecting with people. (Remember, connection is the second step of the OCI influential process.) Connection increases your likability factor, which makes you more influential..

The technique is simple and straightforward. In fact you do you regularly, but don’t realize it.

Think about a time when you were in a crowd and recognized someone you hadn’t seen in awhile – like, running into a college buddy at a concert. What do you do physically, before ever saying a word, to indicate that you know that person.

The flash of recognition looks like this: eyebrows quickly raise, eyelids open wider, a slight head tilt, with a genuine smile.

That’s it! When you practice this signal of recognition, appreciation, and welcoming, those around you will have a positive connotation to the idea of you compared to if you ignore, close off, or take for granted.

Dr. Schafer shares how this one technique is so powerful that he regularly gets favors from people, like free upgrades to first class at airports.

When someone wants to be influential, the first question they ask themselves is, “What should I say?”

If you’ve been a reader of my blog or attended my speeches, you know that influence is actually the third and final step of the OCI persuasive process – observe, connect, then influence.

Before you worry about, “What should I say?,” you have two big steps to take first – observe and connect.

Don’t worry about making yourself seem special, instead make them feel special. Be curious about what they’re talking about. Ask for details. Inquire about the why behind their stories. Everyone is fascinating. Everyone has lived an interesting life. Everyone is complex.Everyone is an interesting mystery to be solved.

You’ll have more influential success when people like who they are when they are around you.

Don’t miss out on other helpful ways you can be more persuasive at work and in life. Sign up for the free newsletter:
[convertkit form=4953775]

4 Thoughts to Never Be Thrown Off by Objections Again